IT in Business - The New Mantra for the CIO

The Role of DCIM in a Lean, Clean and Mean Data C

Technologies Taking Industries to the Next level o

How UAVS Are Empowering Scalability In India 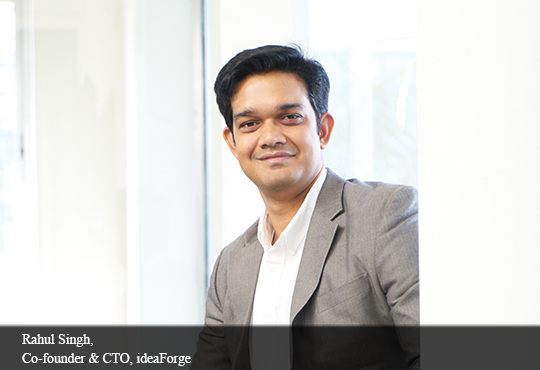 India is home to many challenges - be it in enforcement, development, economics, agriculture or population. While the challenges within each domain vary, there is one aspect that hinders widespread problem solving, and that is scalability. In a country of 1.2 billion individuals, traditional development & operational models of each individual domain start to fall apart rapidly. India has chosen to tackle its challenges head-on through widespread adoption of technology. While we have proven our mettle in using software to tackle such problems (most notably, with the ‘India Stack’), UAVs are slowly bringing cutting edge hardware into the forefront.

In a country burgeoning population and porous borders, domestic as well as international security and enforcement have been a persistent problem for India. Police & Army personnel simply cannot conduct surveillance operations effectively using traditional methods, considering the scale of security threats involved in the region.

The Indian Defence Forces, recognizing the potential of UAV technology, were one of the earliest adopters of man-portable multi-rotor UAVs, colloquially referred to as ‘drones’. ideaForge was the first startup who recognized this need and created the first NETRA UAV in 2007 through a technology partnership with the Defence Research & Development Organisation (DRDO). In the process of developing the NETRA UAV, ideaForge created the then world’s lightest Autopilot.

“Besides real-time flight operations, UAVs have helped bring GIS into the forefront”

Fast-forward to today, the evolving needs of the Indian Defence forces has pushed technology far ahead in capability. While the international community may be unaware of the Indian UAV industry, it is home to category-leading systems globally in terms of performance. Indian OEMs have only recently begun their foray into international markets, where their performance has gathered significant interest from organisations seeking best-in-class specifications & reliability.

When it comes to enforcement, UAVs provide an aerial perspective with a large area coverage which is invaluable in unorganized urban areas, dense forest regions, porous borders and rural areas with high levels of insurgency. Such technology has helped forces identify illegal opium plantations, spot man-eating tigers, detect bootlegging activities in swamps and has also helped save lives through covert surveillance of insurgents. For some defence forces, UAVs have become force multipliers with some systems flying over 6 times in a day and have scaled their capabilities manifold.

For civil operations, India has taken an interesting route. The ‘Digital Sky’ portal, an online platform for automated flying permissions for civil operations was launched on December 1st, 2018. Through this portal, individuals and organisations can apply for flight permission. Once the permission is granted, the user uploads the protocols on the UAV to unlock the Autopilot software for flying the UAV legally. If the permission protocols are breached, an incident report is logged online once the encrypted flight log generated by the Autopilot is uploaded by the user after the flight is completed. This process ensures that enforcement is built-in, and is currently termed “No Permission, No Take-off” or NPNT.

India being a developing nation has among the largest infrastructure projects in the world. Due to India’s need for power and demand for clean energy, it has become a large market for solar technology. 5 of the world’s 10 largest solar power plants reside in India.

With such large solar farms, monitoring the quality of the panels & doing preventive maintenance poses an immense challenge, as scaling skilled manpower becomes expensive and inefficient. Increasingly, operators of solar plants have started to fly Industrial grade UAVs with Industrial Grade Radiometric cameras. With the UAV’s built-in GPS and exact temperature values from the thermal cameras, operators can identify anomalous panels across thousands of acres in a single flight. Challenges such as encroachment by vegetation and illegal structures are slowly being overcome by mounting LiDARs onto UAVs. Using LiDAR, an accurate 3D model called as a “point cloud” is generated across vast lengths of power lines which make it possible to get exact heights and determine the extent of encroachment. The same UAV is then mounted with a thermal camera to help identify hotspots or the potential points of failure in a power grid to help operators carry out preventive maintenance from a safe distance.

Besides real-time flight operations, UAVs have helped bring GIS into the forefront. While previously done with manned vehicles & satellite imagery, the low flying and unmanned nature of UAVs have made high resolution, highly localised orthomosaic imagery economically accessible by several orders of magnitude. Due to their low setup time and ease of operation, it is now possible to capture and stitch together imagery of large-scale infrastructure projects with minimal turnaround time. Using this, a project planner can easily validate progress using hard data rather than rely on subjective estimates. Archiving of this hard data ensures traceability of the project at all levels, and for this reason, is now garnering interest from the insurance industry.

Apart from 2D modeling, the Indian infrastructure & power industries have taken significant interest in 3D modeling which enables accurate 3D models of large areas & stockpiles. The technology is widely used to measure stockpiles and check for pilferage. Architects are also using this technology to generate 3D models of the terrain to plan their projects far more easily. The advantages of UAVs have resulted tenders worth millions of dollars being floated by Indian government agencies even in an unregulated environment. With the formalization of regulations, this number is expected to grow by at least 5-fold by the next financial year.

IT services
Transitioning from CRM to CEM: A Road Map

Enhancing Productivity and Collaboration for a Dispersed Workforce

Drones Are Coming To Your Business

Monetization of The Internet Of Things - Extracting Value from Connectivity

Baseline IT Transformation in Digital Era